Establishment of the School 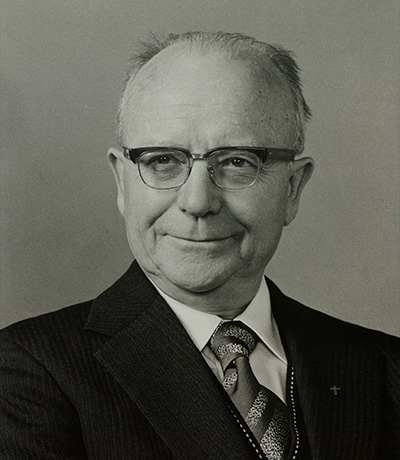 Eiko Gakuen was founded by the Society of Jesus, a religious order of the Catholic Church founded in 1540 by St. Ignatius of Loyola, St. Francis Xavier and others. In their more than 400 years of history, the Jesuits have undertaken countless educational activities in every part of the world.
In the 16th century, when Christianity arrived in Japan, the Jesuits were early arrivals, setting up schools in places such as Arima and Azuchi. These were soon shut down, however, when Japan’s Shogunate government banned Christianity.
The ban marked the beginning of over 200 years of national isolation. The Society of Jesus was only re-admitted to Japan in the closing years of the Meiji period (early 20th century). The Jesuits founded Sophia University in Tokyo in 1913, following with Rokko Gakuin Junior and Senior High School in Kobe in 1938, and in 1947 our own Eiko Gakuen, on the site of an old navy yard in Taura, City of Yokosuka, Kanagawa Prefecture.
Next, the Jesuits founded Hiroshima Gakuin Junior and Senior High School in Hiroshima in 1956. In 1983 the religious order established Taisei Junior and Senior High School (now Sophia Fukuoka Junior and Senior High School) in Fukuoka. Sharing a common educational ideal, each school marshals its own unique traditions as it continues to respond to the challenges of each era.

At the time of the School’s foundation, the Second World War had just ended. Eiko Gakuen’s first principal, a German priest named Gustav Foss, along with his fellow Jesuits and their students, found themselves in turbulent times. Determined to train a generation of outstanding young Japanese men to shoulder the challenges of the new Japan, Father Foss and his faculty worked day and night to build, furnish, and equip the school, at a time when every kind of material was in short supply. Thanks to their many labors, that early faculty succeeded in instilling the spirit and crafting the unique educational approach that Eiko Gakuen continues to uphold to this day.

To provide students with a better learning environment, in 1964 Eiko Gakuen moved to its current location, a spacious plot surrounded by the bounty of nature in the Tamanawa district of the City of Kamakura, Kanagawa Prefecture. This prescient move provided the cornerstone for further growth.
From just two classes with 72 students in its first year of operations, the School has grown to a present-day operating scale of 24 classes serving 1,080 students (45 students per class, four classes per school year, six school years). The total number of graduates now exceeds 10,000.